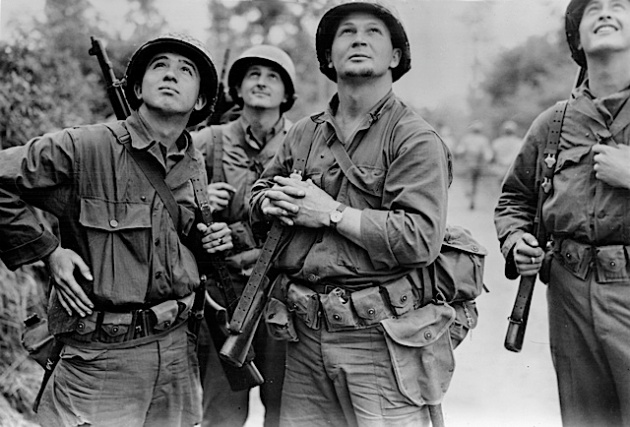 GIs look up at American bombers on their way to bomb German lines at the onset of Operation Cobra.

I missed it by a day, but yesterday, July 25th, was the 68th anniversary of the kick-off of Operation Cobra.  Cobra was the codename for the Allied breakout from the bocage country of Normandy.  The Allies had been bogged down for 7 weeks prior to this, desperately trying to push those stubborn Germans back (this is a shot at my fiance, who is German, and is extremely stubborn)!

Imagine yourself as a young infantryman in the hedgerows of Normandy, France.  You’re dug in, hunkered down in your foxhole, awaiting the order to move forward to engage the enemy and push the Germans back. You’re exhausted, dirty, tired, hungry, scared, and on edge. And you know deep down that every day, every minute, could be your last. You also know there will be a big artillery bombardment that precedes your attack, to soften up German positions. Your Air Force has been carpet bombing them also, and you eagerly watch the big bombers come over to pound the Hell outta the Krauts. But then you notice some of those bombs start to look like they could land right on your head!  So you hit the ground and pray to God the things won’t land right on top of ya and blow you to kingdom come. The ground shakes as the bombs fall, and hot shrapnel zip-zaps around  You hear some of your buddies scream out in pain and horror, and the realization that your own countrymen have just bombed you sends you into indescribable feelings of rage and helplessness.  You’re not just ready to kill as many Germans as you can, you want to rip the heads off those damn pilots too!

My grandfather, PFC Guy I. Wetherell, was wounded about a week prior to Cobra, as the 9th Infantry Division was moving along the Perriers-St. Lo Road (not by friendly fire, but by shrapnel from a German 88).  In his later years, my grandfather’s best friend was fighter ace (having shot down or destroyed 8.5 enemy aircraft) William E. Bryan, Jr., of the 339th Fighter Group.  My grandfather would often kid the retired Major General during a round of golf about the US Army Air Forces having bombed the ground troops during Cobra, which unfortunately wasn’t very funny and happened more often than it should have.  But Bryan, a fighter pilot, thought it was funny in the way that old soldiers find macabre jokes about death  and destruction funny.  Escaping death numerous times as young men will tend to warp your sense of humor.

But being killed by friendly fire is never funny.  The 8th Air Force was responsible for having accidentally killed 111 Americans and wounding another 490 on July 25th alone (after having killed 25 and wounded 131 on the previous day).  Among those killed on the 25th was Lt. General Lesley McNair, the highest ranking American soldier to be killed in the ETO.  McNair was a classmate and good friend of Lt. General Omar Bradley, who was the commander of the First US Army during the operation.  Bad weather was the cause of the casualties on the 24th.  Misunderstandings, a breakdown in communications, and an error in the flight direction of the bombers caused the horrendous friendly fire on the 25th, despite clear weather that day.

Cobra was ultimately a success, and the Allies were finally able to break out from the Normandy countryside and into France.  The Germans lost their hold on northwestern France and would almost be completely decimated in the Falaise Pocket-but once again managed to live to fight another day. But that is for another post.

2 comments on “Being bombed by your own guys”

The World War 2 actions of the 9th Infantry Division

Book reviews and thoughts on history

Where the creative meets the unknown